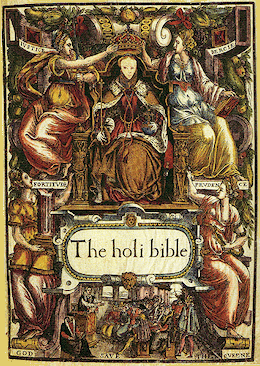 The Bishops' Bible was produced under the authority of the established Church of England in 1568. It was substantially revised in 1572, and the 1602 edition was prescribed as the base text for the King James Bible completed in 1611. The thorough Calvinism of the Geneva Bible offended the Church of England, to which almost all of its bishops subscribed. They associated Calvinism with Presbyterianism, which sought to replace government of the church by bishops with government by lay elders. However, they were aware that the Great Bible of 1539 , which was the only version then legally authorized for use in Anglican worship, was severely deficient, in that much of the Old Testament and Apocrypha was translated from the Latin Vulgate, rather than from the original Hebrew, Aramaic and Greek. In an attempt to replace the objectionable Geneva translation, they circulated one of their own, which became known as the Bishops' Bible.