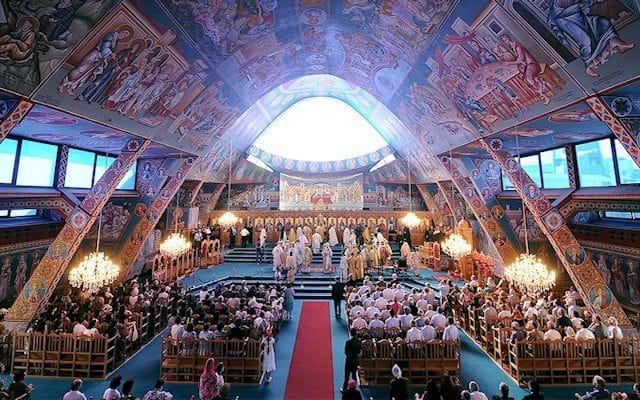 What is the Eastern Orthodox Church?

The Eastern Orthodox Church or Orthodox Church believes it is the Church founded by Jesus Christ and described throughout the New Testament. They believe that all other Christian Churches and sects can be historically traced back to the Orthodox Church. Its recorded history indeed show that it is one of the oldest extant religious institutions in the world.

The word Orthodox literally means "straight teaching" or "straight worship," being derived from two Greek words: orthos, "straight," and doxa, "teach¬ing" or "worship." As the encroachments of false teaching and division multiplied in early Christian times, threatening to obscure the identity and purity of the Church, the term "Orthodox" quite logically came to be applied to it.

The Eastern Orthodox Church is a communion of self-governing churches, each typically governed by a Holy Synod. It teaches that all bishops are equal by virtue of their ordination, and has no central governing structure equivalent to the Papacy in the Roman Catholic Church. The contemporary Orthodox Church had shared a close association with the contemporary Roman Catholic Church until the East-West Schism of AD 1054, which had been triggered by disputes over doctrine, especially the authority of the Pope. Prior to the Council of Chalcedon in AD 451, the Eastern Orthodox had also shared communion with the Oriental Orthodox churches, separating primarily over differences in Christology.

The Orthodox Church preach that they carefully guard the truth against all error and schism, both to protect its flock and to glorify Christ, whose body is the Church. The Orthodox Church believes it has the Christianity espoused by the Apostles of Jesus Christ and instituted by them.

Eastern Orthodoxy is the form of Christianity that developed in the Greek-speaking Eastern part of the Roman Empire and continued later in the Byzantine Empire and beyond, playing a prominent role in European, Near Eastern, Slavic, and some African cultures. During the first eight centuries of Christian history, most major intellectual, cultural, and social developments in the Christian Church took place within the Empire or in the sphere of its influence where the Greek language was widely spoken and used for most theological writings. As a result, the term "Greek Orthodox" has sometimes been used to describe all of Eastern Orthodoxy in general, with the word "Greek" referring to the heritage of the Byzantine Empire. However, the appellation "Greek" was never in official use and was gradually abandoned by the non–Greek-speaking Eastern Orthodox churches, from as early as the 10th century A.D.