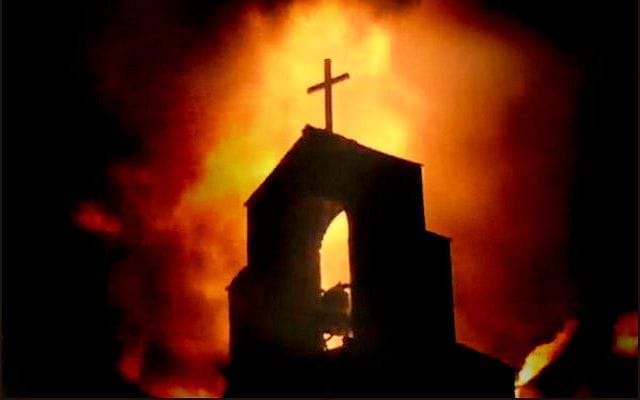 The early Christian church suffered many persecutions for our Lord's name, but none were more brutal than the Diocletian persecution.

The reign of emperor Diocletian (284−305 AD) marked the final widespread persecution of Christians in the Roman Empire. The most intense period of violence came after Diocletian issued a proclamation enforcing an adherence to the traditional religious practices of Rome.

On February 23, 303 AD, Diocletian ordered that the newly built Christian church at Nicomedia be destroyed, its scriptures burned, and its treasures seized. It was the day Diocletian thought would terminate Christianity. The next day, Diocletian's first "Edict against the Christians" was published. The edict ordered the destruction of Christian scriptures, liturgical books, and places of worship across the empire.

Eusebius of Caesarea, a Church historian of the era, recorded that many "Scriptures" were burned during the Diocletian persecution. He writes in Church History (VIII:2):

"All these things were fulfilled in us when we saw with our own eyes the houses of prayer thrown down to the very foundations, and the Divine and Sacred Scriptures committed to the flames in the midst of the market-places..."

The persecution varied in intensity across the empire; weakest in Britain, French Gaule, Latin Gallia (comprising modern-day France and parts of Belgium, western Germany, and northern Italy), where only the first edict was applied, and strongest in the Eastern provinces. Certain schisms, like those of the Donatists in North Africa and the Meletians in Egypt, persisted long after the persecutions. Almost every Christian manuscript in Egypt was destroyed.

A vast number of early manuscripts were destroyed in the early persecutions of the Church. There were already ten major periods of persecution of Christians before Nicea: