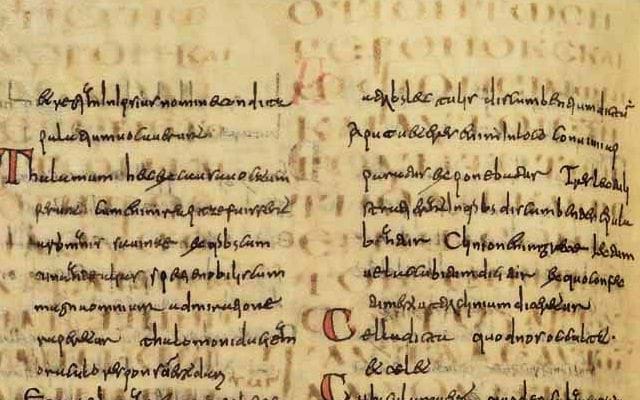 The Palimpsest Theory and the Codex Vaticanus

Before we go any further we must understand the nature of a palimpsest. The word "palimpsest" is derived from the ancient Greek παλίμψηστος (palímpsēstos), a word that literally means "scraped clean and ready to be used again." Putting it simply a "palimpsest" is a manuscript that has had the text scraped and/or washed from the pages so the codex could be used again to write a new text.

Why would anyone want to create a palimpsest? The answer is cost. The binding of the vellum pages into a codex and the cost of the vellum pages themselves were extremely expensive. If a codex was found to be corrupt but in good condition, because nobody wanted to use it, then it was stored away waiting to be made into a palimpsest codex. So robust is the velum that the potential palimpsest could be stored away for many centuries until needed.

The picture with this post is of Codex Guelferbytanus which is a Byzantine Greek text and is a Greek uncial manuscript of the Gospels. This codex now resides in Wolfenbüttel, Germany and was one of the manuscripts that came from the Fall of Constantinople. It escaped in the possession of one of the Byzantine refugees fleeing the violence of the Islamic Ottoman Turks.

The text in Codex Guelferbytanus is dated to the 12th century, however, the underlying palimpsest text is dated palaeo-graphically to the 6th century. This is very important because there is a 600 year gap between the different texts and proves that old codices were stored and preserved over extremely long periods so they could be revived as palimpsests.

The Codex Vaticanus was one of those unused manuscripts stored away in Constantinople awaiting to be made into a palimpsest but when Constantinople fell in 1453 it was taken by a Byzantine refugee to Rome and was subsequently sold to Cardinal Bessarion. We know it was in his possession because the minuscule supplement has a text similar to one of Bessarion's manuscripts. Cardinal Bessarion then sold the Codex to the Vatican Library in 1475. The codex was cataloged 6 years later under the name Codex Vaticanus.