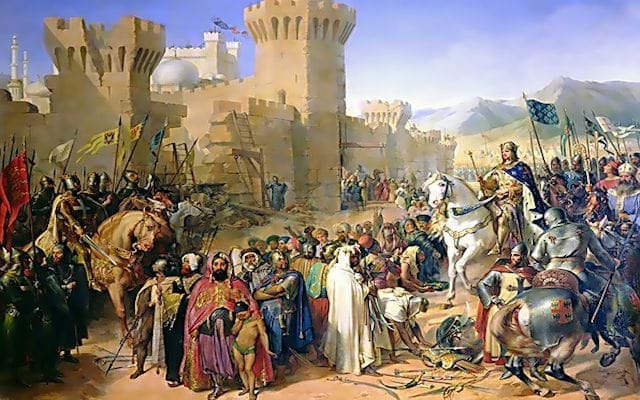 The Crusades to the Holy Lands

The Crusades to the Holy Lands were a series of religious wars in the middle ages. The very first of the crusades passed through Constantinople (Byzantium) and then right through the heart of the Byzantine Empire. The Byzantines had been battling the Ottoman Turks for centuries at this point and the Crusaders were very much welcomed and given safe passage. On their return, the crusaders brought with them the greatest gift of all; New Testament manuscripts.

The Crusades were also sanctioned by the Latin Church in the medieval period. The most commonly known Crusades are the campaigns in the Eastern Mediterranean aimed at recovering the Holy Land from Islamic rule but the term "Crusades" is also applied to other church-sanctioned campaigns. These were fought for a variety of reasons including the suppression of paganism and heresy, the resolution of conflict among rival Roman Catholic groups, or for political and territorial advantage.

In 1095 Pope Urban II called for the First Crusade in a sermon at the Council of Clermont in France. He encouraged military support for the Byzantine Empire and its Emperor, Alexios I, who needed reinforcements for his conflict with westward migrating Turks colonising Anatolia. One of Urban's aims was to guarantee pilgrims access to the Eastern Mediterranean holy sites that were under Muslim control

It was not only the English that fought the crusade but also the French. One of most celebrated Middle Age manuscripts was "The Crusader Bible". The history of the Crusader Bible is fascinating, covering seven centuries and multiple continents. Likely created in Paris during the 1240s for King Louis IX of France (famous for building the Sainte-Chapelle and for leading two crusades) the Bible then passed to the king’s younger brother, Charles of Anjou, who took it to Italy.

More than four centuries later, the Archbishop of Cracow acquired and offered it as a diplomatic gift to the great Shah of Persia, ‘Abbas I. By the eighteenth century, the manuscript belonged to an anonymous Persian Jew. After its journey from France to Italy, Poland, and Persia, the Bible traveled to Egypt, England, and finally to The Morgan Library & Museum in the United States.

The Crusader Bible bears inscriptions in Latin, Persian, and Judeo-Persian. They function as evidence of its changing ownership throughout the centuries and reflect how each owner used his language to lay claim to the book, appropriating its imagery for assimilation into their respective cultures.