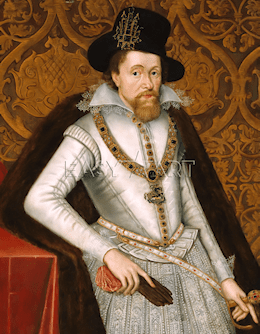 The commissioning of the King James Bible took place at a conference at the Hampton Court Palace in London England in 1604. When King James came to the throne he wanted unity and stability in the church and state, but was well aware that the diversity of his constituents had to be considered. There were the Papists who longed for the English church to return to the Roman Catholic fold and the Latin Vulgate. There were Puritans, loyal to the crown but wanting even more distance from Rome. The Puritans used the Geneva Bible which contained footnotes that the king regarded as seditious. The Traditionalists made up of Bishops of the Anglican Church wanted to retain the Bishops Bible.

The king commissioned a new English translation to be made by over fifty scholars representing the Puritans and Traditionalists. They took into consideration: the Tyndale New Testament, the Matthews Bible, the Great Bible and the Geneva Bible. The great revision of the Bible had begun. From 1605 to 1606 the scholars engaged in private research. From 1607 to 1609 the work was assembled. In 1610 the work went to press, and in 1611 the first of the huge (16 inch tall) pulpit folios known today as "The 1611 King James Bible" came off the printing press.